Atlantis Subsea Farming – a farming concept designed for the future

The latest innovation in cage technology under development is submersible cages for largescale salmon production. 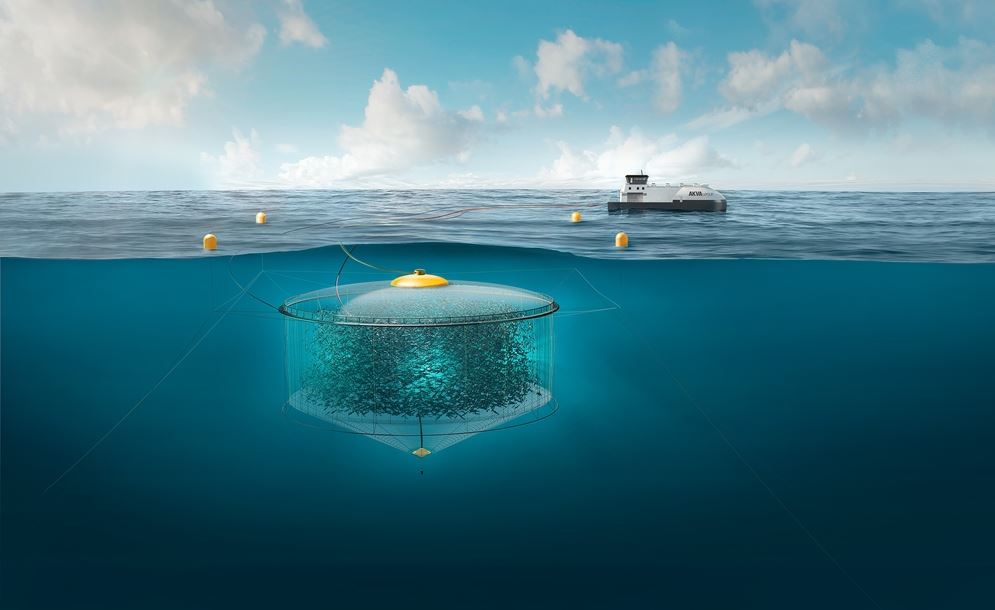 In Atlantis Subsea Farming, the cooperative companies AKVA group, Sinkaberg-Hansen and Egersund Net will develop a completely new concept for submersible cages for large-scale salmon production. Atlantis Subsea Farming have applied for development licenses in order to test the concept in large-scale trials. The hypothesis is that fish welfare and production efficiency will be as good or better in submerged position as in the surface position. If the project succeeds with salmon, the concept is easily transferable to other species.

According to Trude Olafsen, this concerns submersible cages with circumferences of up to 160 metres. Going deeper has several benefits. One avoids the largest waves and ocean currents are less powerful, which means that the forces affecting the facility are different than those on the surface. So far the realm of salmon has been from the surface and down, buttechnological developments may change this in the time ahead. When we arrive at the point when we are able to develop submersible cages that provide salmon with a good life below the area where sea lice typically thrive, we may solve the greatest challenge the salmon farming industry faces.

It is all about establishing a system that provides efficient operations on the salmon’s terms. One has to ensure a high level of fish welfare, good fish health and good growth. “If we succeed with salmon, this system can be easily applied to other farmed species and the market for such technology in a global scale is vast,” Trude Olafsen points out.

In collaboration with equipment manufacturer Egersund Net and aquaculture company SinkabergHansen AS, AKVA group ASA started work on submersible cages for the large-scale production of salmon in 2014. The three companies established Atlantis Subsea Farming AS, and the goal was to contribute to better and more sustainable use of existing aquaculture locations, in addition to exploiting more exposed areas where current technology comes up short. This work was already well under way when the authorities launched a new concept of development licenses towards the end of 2015. The authorities’ goal is to facilitate the development of technology that can contribute to resolve the environmental and space issues the aquaculture industry faces. This was correlating well with Atlantis Subsea Farming AS ‘s goals, and the company has now applied for six such development licenses.

Better conditions for the fish

In addition to the obvious technological benefits of submersible cages, Olafsen also believes that the salmon will benefit from being well below the surface. She believes it will be easier to feed the fish, that growth will be better, and last but not least that infection by sea lice will be greatly reduced.

Olafsen continues, “However, when all is said and done, I have to add that these are hypotheses that have to be tested before arriving at any conclusions.” A development project at this level has numerous challenges that must be resolved, and operating costs may be very high for a period, so development licenses are a good aid. Regardless, the owners will have to put up significant funds to succeed.

The companies behind Atlantis Subsea Farming own a third each, and according to Olafsen it is uncommon for technology suppliers and aquaculture companies to team up as equal partners in this type of development company. Olafsen believes that it is important to try out new ways of working, and believes AKVA group is a good partner in this concept. She explains, “This is a new and very interesting way of working, and the future will show if it is a viable model.”

When the company is working with new technology and such high risk, one also has to take a new approach with regard to business models. To achieve good efficiency from subsea production, the cage will probably have to be ten metres below the surface, and there are numerous considerations that must be taken into account if we are to succeed. However, the actual cage system is based on the same principle as the submersible cages AKVA group has supplied to the export market for many years. The plastic ring is filled with water before being submerged, and then emptied when the cage is raised. The difference in the new concept is that the entire process will be controlled from the fleet, with dedicated software programmed for this system.

Another aspect is underwater feeding, but in this area there already is a well-functioning product developed by Sinkaberg-Hansen’s service company, Nærøysund Aquaservice.

Feeding and oxygen at depth

Initially one expects the salmon to have better access to oxygen at greater depths than at the surface. However, once a day the salmon needs to fill its air bladder, and in order for this to be possible in submersible cages one is dependent on artificial air pockets. In this area AKVA group is cooperating with Frode Oppedal and his research group at the Institute of Marine Research. Through the FÔRDOM project, which is funded by the Research Council of Norway, they are working explicitly on feeding at depth and the use of air domes.

“FÔRDOM is a great project, and the results can be directly applied in Atlantis Subsea Farming.” Olafsen points out.

Sea lice are a recurring problem for aquaculture, and hard work is being done in a variety of projects to prevent sea lice from attaching themselves to salmon and breeding. So far no one seems to have come up with the optimum solution that would make it possible to claim the problem has been eradicated, but Olafsen believes large-scale trials with submersible cages may be of great help going forward.

“Sea lice are very clever, and we can’t discount that they could adapt to the darkness deep down, but in that case it would be a dramatic change. Regardless, a large-scale trial with production deeper in the sea will provide important documentation of how sea lice will act,” Olafsen says. She also says that such production will provide new knowledge in other areas, for example with regard to avoiding algae or the spread of viruses and bacteria. But it may also be the case that salmon could contract other diseases further down the water column. If so, this will be very useful knowledge to have.

More food must come from the sea

In the future we will depend on producing more food in an efficient way, and we have come quite far with work on developing salmon production, but a lot still remains. It is thus important that the industry has the opportunity to grow. Olafsen concludes, “We are responsible for developing aquaculture further. The world depends on producing much of the food we need in the sea, and we have come quite far in developing salmon production. It is also a healthy and sought-after product in various markets all over the world. However, growth cannot take place without control, and although technology is decisive for developments, we are also dependent on including biology. It is essential that the fish have good welfare and good health.